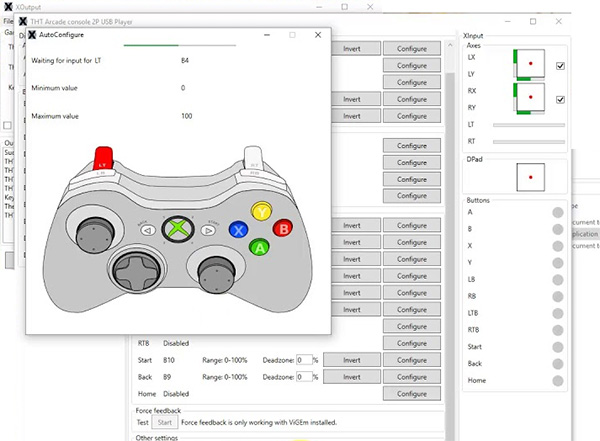 XOutput is an easy tool that converts DirectInput into XInput data so that you can use XBox 360 controllers when playing games on your PC.

If you are not able to get the old game controller to work on new games, then you should know that the problem arose when Microsoft changed the controller APIs from DirectInput to XInput. Some old controllers will not work anymore for the new games. You can use XOutput so that the controllers work on Xinput instead of direct input. XOutput converts the Direct Input into Xinput and gets your controller operating in the proper conditions.

Using XOutput can allow you to use the old controllers with the new games as well. It can save your money and provide you with the latest entertainment opportunities. Although no software compatibility requirements are required for using Xoutput, it is expected that you will have VIGEm driver installed in your computer to make this application working correctly. Despite the fact that both APIs coexisted side by side for quite a while, it turns out that they are not compatible with most games released after this point.

Xoutput While the program does not need setup, you need to make sure that you have the ViGEm drivers installed on your system so that you do not get any errors. You will be happy to learn that the tool recognizes the input devices connected and you can find the one you want to configure the Game Controller section. XOutput can provide you with the ease of managing the new games without facing the compatibility issues. Configuration settings of the older controllers can also be adjusted using this application. 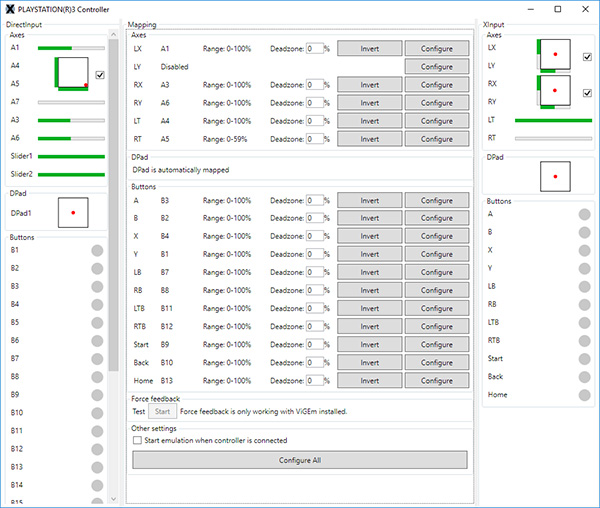 How to play Multiple players with one computer and Multiple keyboards

If you are asking this question the answer is Yes, you can use two keyboards to play multiplayer games like Pro Evoulation Soccer and EA FIFA Soccer. If your friend don’t have joysticks tell him to bring a keyboard to play in multiplayer mode.

Keyboard splitter Software like :
1- Gaming Keyboard Splitter creates up to 4 virtual xbox 360 controllers and feeds them via one and up to ten keyboards.
2- XOutput: Converts DirectInput into XInput data so that you can use XBox 360 controllers when playing games on your PC.

How does It Work
You need to connect multiple keyboards into your computer and make then act as a single keyboard then you can use these keyboards for playing multiplayer games on one Computer. You need a small tool called Keyboard Splitter to make virtual Xbox 360 controllers and connect the input from the separate keyboard to each Xbox Controller.

Now the Xbox controllers appear to be plugged and windows will allow you to play multiplayer games using these controllers. You can easily customize Keyboard Splitter keys to play almost any game you want. To test the controls configuration and make sure they are set correctly use the build in function called "Test Virtual Controller" to make sure that the controller setup is correct and ready to use. 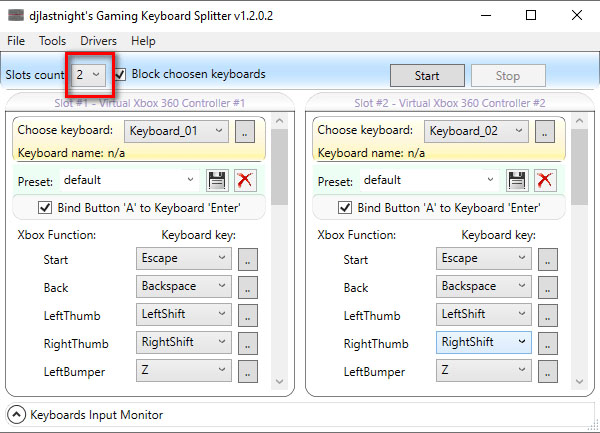 3- Launch Keyboard Splitter and select the desired number of keyboards that you want to connect.
4- Choose the game name from the drop and select the default if your game is not found.
5- Use Test Virtual Controller function to make sure that the button configurations are correct.
6- Save you control configuration for later use
7- Check the box with block the chosen keyboard and click start.
8- Now you are ready to play multiplayer games with up yo 4 keyboards on the same Computer.

When i launch the program it closes immediatly
- Updated DirectX and installed both the 32 and 64 bit versions of 2015 visual c redistributable.

DS4Windows (Ryochan7 fork)
DS4Windows is a program that allows you to get the best DualShock 4 experience on your PC. By emulating a Xbox 360 controller, many more games are accessible.

JoyToKey
JoyToKey enables you to control any softwares by using your favorite windows...

Xpadder
Xpadder simulates the keyboard and mouse using your gamepad.

jstest-gtk
jstest-gtk is a simple joystick tester based on Gtk+. It provides you with a list of attached joysticks, a way to display which buttons and axis are pressed.

X360ce
XBOX 360 Controller emulator is a wrapper library that translates the XInput calls to DirectInput calls, to support non-XInput game pads in applications.

JoyXoff
Integrate your keyboard and mouse in one place and turn off the Xbox 360 Controller easily on PC.

ControllerMate
ControllerMate is a controller programming tool that allows you to customize the behavior of your HID devices — keyboards, keypads, mice, trackballs and joysticks.

InputMapper
InputMapper is a DS4 (DualShock 4) input mapper that allows you to connect your PS4 gamepad to windows, wired (USB) or wirelessly (Bluetooth).

Controller Companion
Put mouse, media and keyboard control in the palms of your hands so you'll never have to leave the couch again!

Gopher360
Gopher is a tool for turning 360 or XOne controller input into mouse & keyboard input.

Xiaomi Gamepad to Xbox 360 controller Mapper
An input mapper app that add xinput to Xiaomi Mi Gamepads, so windows games recognize Xiaomi gamepad as a x360 controller & you can play them without any difficulty.


Joystick to mouse let's you control the mouse and keyboard using your joystick or gamepad.

Enjoy2
Enjoy2 is a simple program for OSX that allows you to transform joystick inputs into keyboard or mouse events.

ControlMK
ControlMK is an utility which uses DirectInput controllers to emulate mouse, keyboard, and other types of commands.

J2K
JoyToKey is a very feature-rich joystick to keyboard mappers.

QJoyPad
QJoyPad is a free Linux/QT program that lets you control any keyboard XWindows program with a gaming device.

Enjoyable
Enjoyable is an application for Mac OS X which allows you to use controller inputs like a mouse or keyboard.

How to play games with two Keyboards - Method 2 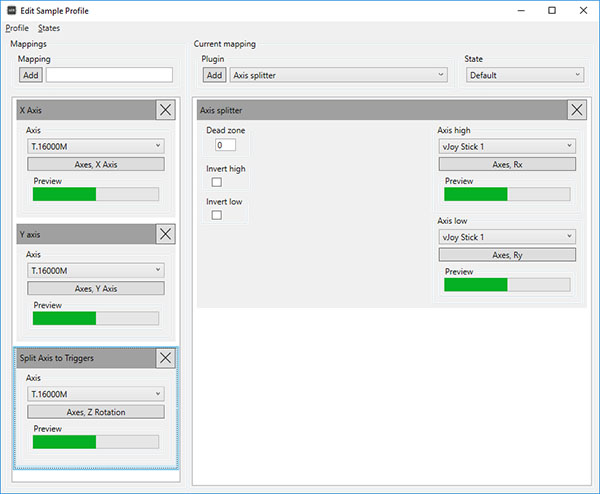 Some games does not allow multiple players on keyboard so if you want play games with two keyboards you need to remap any inputs such as keyboards, mice, joysticks, racing wheels, eye trackers, etc. to virtual output devices. Remapping is achieved by transforming inputs through plugins to a desired output device.

How to install UCR
Download UCR and install it, then reboot your system
After rebooting, start UCR. If you extracted UCR with Windows's zip extractor, you may be prompted to run it by Microsoft SmartScreen. You will then be prompted by UCR to unblock additional components of UCR, which will require going through SmartScreen again.
Now go to Devices then to Manage Device Groups and create an input group and add your keyboard to it.
Make an output group and add the ViGEm Xbox 360 Controller 1 to the group.
Select Profile then New to make a new Profile then select the added input and output groups.
Edit the Mapping Inputs and map your controller buttons.
To map the triggers, use the Button to Axis plugin.
To map an axis, use the Buttons to Axis plugin for each joystick. If you find that your two buttons are the wrong way around, you can check the Invertcheckbox to swap them.
Check if the mapping are correct by selecting Profile then select Activate Profile. The status of inputs and outputs will be shown as bars. Before starting UCR make sure you have installed the controller driver and ViGEm.
Now open UCR and activate the added profile.

To conclude XOutput works on Windows operating system(s) and can be easily downloaded using the below download link according to MIT License license. XOutput download file is only 399 KB in size.
XOutput was filed under the Tools and Editors category and was reviewed in softlookup.com and receive 5/5 Score.
XOutput has been tested by our team against viruses, spyware, adware, trojan, backdoors and was found to be 100% clean. We will recheck XOutput when updated to assure that it remains clean.

Please review XOutput application and submit your comments below. We will collect all comments in an effort to determine whether the XOutput software is reliable, perform as expected and deliver the promised features and functionalities.