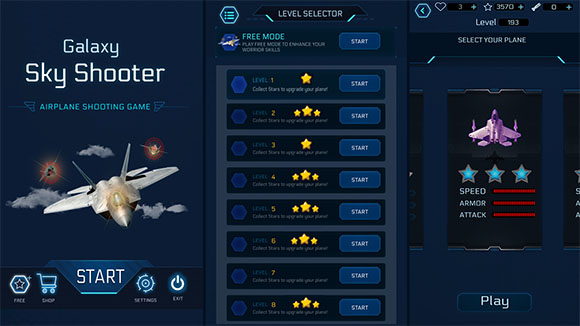 Galaxy Sky Shooter is an amazing, addictive and fun arcade game with lot of fighter planes. You have to battle squadrons of planes, enemy bombers as you achieve upgrades to your plane weapons.

Earn more stars to unlock more powerful aircraft with new weapons and air missiles. You will be faced with lots of bombers and deal with many powerful planes in this galaxy wars. Download Galaxy Sky Shooter Now!

Your mission is to lead the battle and become the top sky shooter. It is time to take action: shoot, fight, and don not leave any enemy in this challenging arcade game. Acquire new skills and fast reactions to memories enemy attack patterns.

- Drag the plane to move
- Tap the bomb icon to use the bombs
- Tap the rocket icon to use air missiles
- Gain stars in every stage to upgrade your plane and get more bombs
- Use power-up and booster items to level up and defeat the enemies easier. Get your plane ready for Galaxy Sky arcade shooter game and become the new hero. You will be faced with lots of powerful enemies and striker in this sky wars.